I started this series last year.. and forgot about it for a while. It was born from sharing some stories with my mother to show how I encounter so much kindness and care, especially as a lone female traveller.

I have seemed to rid of my writer’s block and wanted to revisit the memory lane with these stories. Furthermore, having recently experienced some bad, I needed to reassure myself and many travellers out there, that I had experienced the goodness of humanity and those far outnumber the evil.

On a cross country vacation I took back in the USA between my moves from Asia to Europe, I stopped through South Dakota. I got off the train in North Dakota, and drove to South Dakota. I wanted to see the parks in the area- Badlands National, Mouth Rushmore, Wind Cave, Custer State…

I found a charming bed and breakfast run by a sweet couple who still maintain the working ranch it sits on. I hadn’t paid attention to the fact that it was SD’s busiest two weeks of the year- the Sturgis rally. As a last minute booking, they worked to accommodate me, asking me to move from their main B&B building to a separated coach house usually rented to families for one night in the middle of my stay. No problem.

I completely underestimated the distances I had to drive to get to all the sites I cared about. As a native New Englander, I completely lost perspective of how large some of these states are. So I found myself driving longer and later than anticipated.

One morning, the day I stayed at the coach house, I slept in. I had a particularly late return, the night before, barely awake enough to grab my pajamas out of my packed bag to change into before collapsing on the closest bed to the entrance. So I took my time getting up the following morning, rummaging around my new surroundings to find the kitchen and prepare a breakfast. I also took advantage of my access to laundry machines to do a couple loads.

I heard car tires rumbling up the dirt road and looked up to see the owner pulling up. He popped his head in, apologized for intruding, saying his wife asked him to check on me. They hadn’t seen my rental car turn in before they went to bed last night and wanted to make sure I was OK before they call the cavalry.

I was surprised, but pleasantly so. Even I knew I had returned at an extremely late hour. But, as B&B owners, they didn’t have any responsibility over my coming and going, as long as I paid for the lodging I booked. Knowing that they were concerned on my behalf was both embarrassing and comforting. The fact that they were willing to notify someone if I wasn’t present after one night alone, gave me the assurance that despite the vast and seemingly desertedness of the state, I wouldn’t have been stranded unknown for long, were I to encounter any troubles.

Other posts in this series:
– Italy

I have logged most of my driving hours on the left side of the road for the past few years.. I thought transitioning to the right, where I’ve driven for over a decade would be easy. For the most part it is. However, every now and then, my subconscious surprises me.

After a month and a half of American roads, I noticed these Asian-influenced behaviours in myself:
– When pulling up to the tool booth, I hug the right curb, earning a huge gap for my coin toss or an annoyed toll collector.
– “T” intersections confuse me.
– I drive slow. So very slow. I don’t think I’ve spent even 5 cumulative hours the past three years driving more than 30mph.
– I think American drivers are a bunch of jerks. People in developing countries don’t know how to drive because they went from livestock making the decisions to having to steer an automatic vehicle in less than a generations. Americans on the other hand are taught better and do know better. They just choose to be jerks.
– I have forgotten to pay attention to stop signs.
– I am befuddled when I actually have the right of way.
– I drift. Because the road looks smoother the way I am going.
– I ignore line markings and follow traffic flow. (which is, fortunately, between the lines )
– I mastered the art of passing in tight spots.
– I park rear in.

The last week I had in the States, I was driving my aunt. As I waited for her too late direction to turn right out of the parking lot, I had crossed over three of four lanes to make the turn before I realised I could only go left. Confused, I asked my aunt why she made me turn on an one-way street. As I turned left and pulled up to the light, it dawned on me that the road was not one-way but that I confused the streets as left-side traffic. Six weeks and that still rears it’s ugly head in moments like that!

See that long small country to the right of Australia? It’s New Zealand. It is one of my favourite destinations, hands down. The best way to get around is on your own. Sure, there are train and buses, but for the most part, people drive. What a gorgeous drive it is too.

I traversed from the North, from Auckland, to Rotorua, Waitomo, Napier, Wellington, then cruised down to the South via Blenheim, Franz Josef, Queenstown, and the Fjordlands. On the map, it looks like a small country, particularly when dwarfed by neighbouring Australia. But it was a lot of driving, particularly in South Island. My destinations were rather spread out, more because I was short in time than from lack of interest.

I cannot imagine any other country where I would see such a drastic change in geological environment and in topology. Auckland is practically the tropics. I arrived donning wool sweater, long coat, thinking I have left the heat behind in Bangkok. I ended up pulling over and wiggling into the one t-shirt I brought. By the time I got to Milford Sound, I had three jackets, a scarf, gloves, and long underwear. One stop, I was diving in the sea water with the wild dolphins and stocking up in groceries at the farmers’ market. The next one I was hiking on glaciers, looking up at the highest snow-capped peak.

The speed limit had never been so easy to keep an eye on, an even 100kph, needle pointing at 12 o’clock. Roads inbetween villages were long, uninterrupted, and rather empty. It took me a while to remember to always fill up at a petrol station, even if the tank is still half full. I came to a spell where there was no gas station for over 260 kilometers. How on earth did people living along that stretch manage??

I stayed at a variety of lodging options, from bed & breakfasts, hostels, hotels to apartment rentals. Bed and breakfasts, hands down, are my favorites. More often than not, the hosts sit down with me over breakfast to chitchat. Especially as a lone traveler, these B&Bs afford me a nature environment to engage with locals, not that it was hard to do anywhere in New Zealand. Hostels in this country also have a different meaning than usual. When I think hostels, I think teen and college-aged backpackers. Here, though, the average age is probably in the 40s. A majority of people I saw actually were retirees or people well established in their career and taking a sabbatical. The biggest thing is the availability of rooms with en suite bathrooms. I don’t care how cheap it is, I am too old to be padding down a hallways of strangers just to go brush my teeth.

All in all, there are very few parts of the entire drive where the scenery was not breath-taking. Knowing what I know now, I would have given myself more time, but then vacation time is never enough, is it? 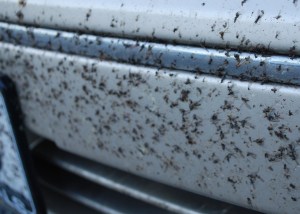 I realised in my most recent venture out driving in the road tonight:

I haven’t seen any signage that seems to resemble any sort of a posted speed limit.

I stand to confirm that it *is* indeed possible to sit in a single spot in traffic for over an hour.

Or more if I had cared to wait.

It probably wouldn’t seem as bad if I hadn’t lost the code to my car radio and wasn’t sitting in silence.

I’ve driven the grand total of five times since my car arrived this month:

Since then, the car has been collecting dust in the bottom level of the parking garage.

Lessons from driving:
– Don’t make sudden turns and swerves, or you’ll hit an on-coming motorcyclist trying to sneck around you.
– People to give way if you turn on your turn signal.
– Look twenty times before making a move, because the scene changes every second.
– People don’t notice when you drive without a license plate.
– It’s nice to have someone on the passenger seat to reach out to pay the toll.
– 3 miles can mean anywhere between three minutes and one hour.
– Driving while functionally illiterate ain’t pretty.