For those of us uninformed, when we think of Australia animals, we think kangaroos, koalas, Tasmanian devils. For those with a little more background, we may even think the gazillion poisonous snakes and spiders that wander around here.

How about them wombats?

Funny looking marsupials, closely related to koalas but burrow in the ground. They have pouches where they carry their babies and a very hard boney backside, which they use to snap at predators. It is not unheard of to see dead predators with broken heads and necks laying by the entrance of a wombat burrow.

OK, I’ll be honest. They are ugly animals. But the babies are SO CUTE!!!!!

We paid a visit to Majors Creek Wombat Refuge, a small self-run self-funded refuge focused on saving injured wombats. Most wombats they get are hit by cars or have mothers hit by cars. At the time of our visit, they have over ten babies in their care. And a few adults waiting to be released back into the wild.

The owner, Bill, has converted his large farm land into a series of wombat pens. The younger the babier, the more enclosed the pen, to protect from predators and disease carrying rodents. The older the wombat, the more open the pen.. although Bill admits he is losing the battle to their burrowing habits. Some of the metal walls he as put up are more buried than above ground.

We actually didn’t see many full grown wombats. Most of them were underground except for a couple that have been too injured to survive on their own. 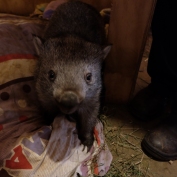 For the babies, Bill and his wife fashioned fleece pouches from donated clothing. They had cut off the arms off the sweaters, sewed up the arm and neck openings, and hung the pouch off the side of the pens. The babies just knew to look for them, many of the more mobile ones automatically climbing into the pocket on their own to curl up and shut us out.

I never knew I wanted to meet a wombat.. let alone hold one. But, yes, I did. They made very little sound, and just wanted to be held in a warm embrace.. as if they were back in a pouch.