Mandalay holds the old Myanmar glory of being the last royal capital. Today stands as one of the country’s major cities by its own right.

Yangon was (more on the past tense later) the center of the modern government and its governing interests and international presence. I feel that Bagan is the home of the Burmese soul and Mandalay is the home of the Burmese hearts. Mandalay enchanted me. A bustling city by its own right, Mandalay has a history feel without loosing its sense of growth and development. While Mandalay was the last royal capital, the area still conveys the old dignity in its character.

Most of its old palatial sites was destroyed. A few unexpected survivors dotted the city landscape. For reasons unknown, one of the buildings were moved out of the palace grounds to Mandalay Hill. Over time, it eventually became the  Shwenandaw Monastery until someone discovered the origin of the building and the government turned it into a historic site.

The woodwork is amazing. The building itself has been moved a couple of times and the modern carpentry has made its way into the reconstruction process. However, the intricate foundation on stilts and the detail in the carvings on every inch of the wall, interior and exterior, makes it a formidable feat of architecture and design. Most of the wood carving details have faded or softened over time. But some probably never were there to begin with because the wood was just the base. The building had in its heyday been completely gilded. As the guide was explaining that, I mentally sized up the building and the quantity of gold it would take. Gold is $1500 an ounce today, people. 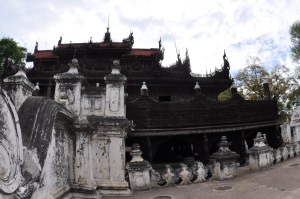 Another impressive site is Kuthodaw Pagoda. It wasn’t so much the main pagoda as the environs that was striking. Pagodas often start looking alike to many laypeople. But in this temple, the entire Buddhist scriptures were written out on marble slabs, single spaced, double sided. Each slab stood up housed in individual stupas. It took 729 slabs to cover the entire texts. Which means 729 individual dedicated housing units for each two-sided page. Each slab is about 14 cm thick, 1.5m high and 1m wide. It is said if stacked together, it is over 103 meters high, making is the world’s biggest book.